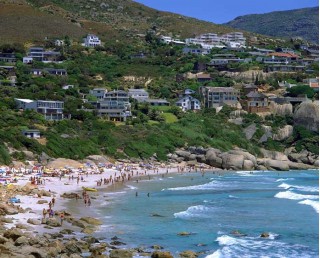 Part of Llandudno’s magic is it’s setting; it nestles on and between Klein Leeukoppie and the Twelfth Apostle of Table Mountain overlooking the ever-changing, icy blue Atlantic.  The beach ranks with the best in the world. Its turquoise water and expanse of fine white sand partly disappears in winter during the storms, fortunately reappearing in summer when the southeasters prevail.

There is some fear however that the stabilizing of the great dune at Hout Bay will eventually denude the beaches at Llandudno and nearby Sandy Bay.

The water in the summer months is possibly the coldest in Africa but winter temperatures are often a few degrees warmer. During storms waves up to 6m or 7m high can be heard crashing onto the beach and pounding against the huge granite boulders surrounding it. Most of the year, though, the waves provide excellent surfing. Depending on the prevailing wind and waves, and the pattern of the sand banks very strong currents can develop. These could easily carry an unwary bather out to sea.