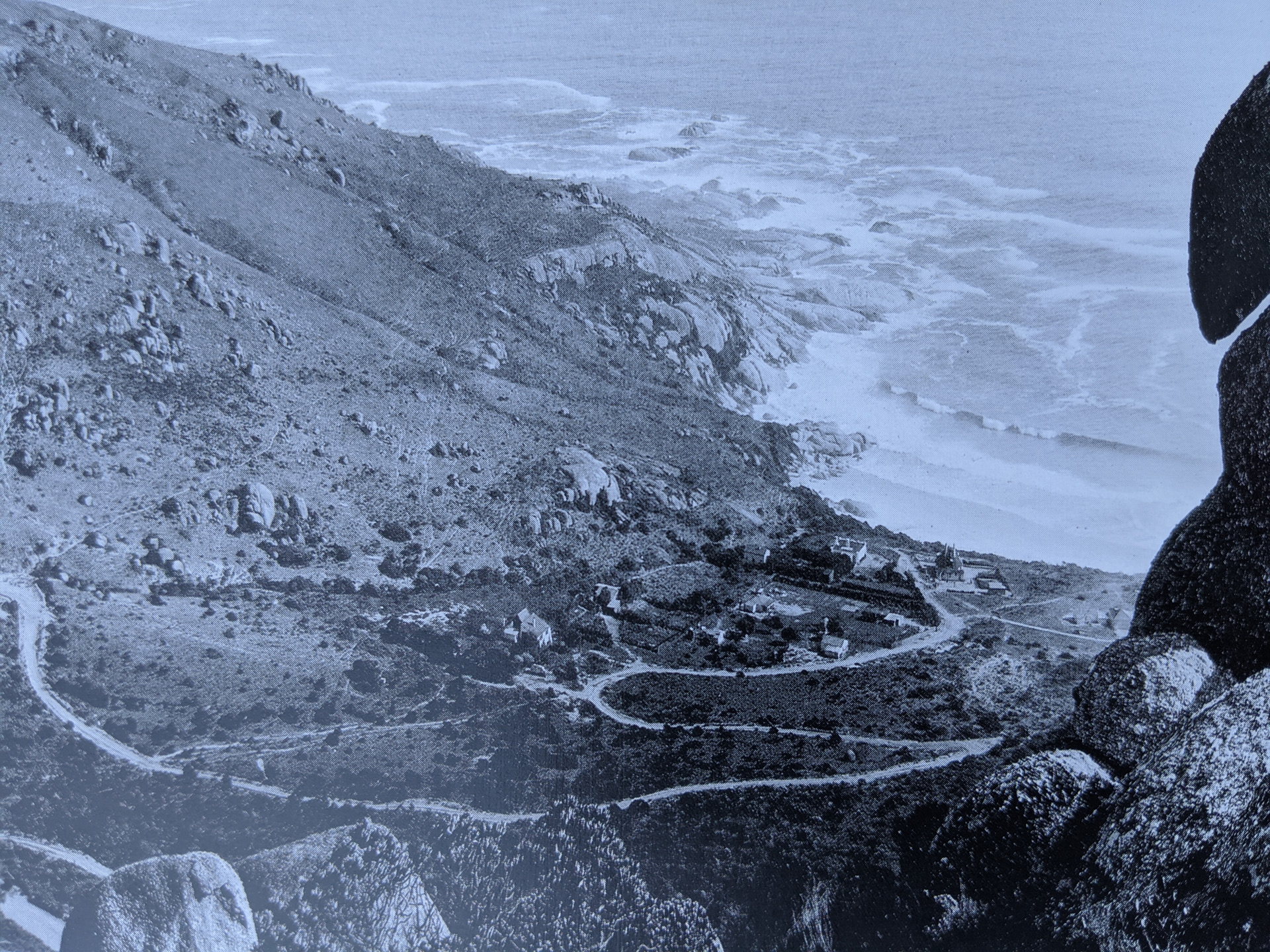 Tudno was the first person to bring Christianity to that part of Wales so he was made a saint and had a town named after him.

The stretch of countryside on the west slopes of Table Mountain has always been a wilderness, sitting right on the doorstep of the sprawling city that has become Cape Town.

When Van Riebeek settled at the Cape he became familiar with the path lying below the Gevelbergen (Gable Mountains – his name for the Twelve Apostles). It was the cattle track used by “The Watermen”, a Khoikhoi clan who bartered with the Dutch, supplying the fledgling colony with its livestock.

For centuries this land remained the stamping grounds of the “Strandlopers”, Khoikhoi who lived in caves along the coastline. While the colony spread from below Table Mountain along the eastern slopes to Observatory, through to Wynberg, Muizeberg and beyond, the western slopes of the mountain always remained wild and untamed.

The cattle track continued to be a rough path until Mr Thomas Bain (after an illustrious career building 23 mountain passes in out of the way places like Montagu) started work on a coastal road linking Camps Bay to Hout Bay. Work was completed shortly before Queen Victoria’s Golden Jubilee in 1887 and the Victoria Road was born. By the dawn of the motorcar, a drive beneath the unspoiled Twelve Apostles to Hout Bay was on the top of every holidaymaker’s agenda.

Kleinkommetjie, the idyllic bay lying below the Victoria Road under the majestic gaze of Judas Peak, was a highlight of the drive. A popular stop-off was the lookout point that stands at the highest point on the road above what is today known as Llandudno, as it still is today.

By 1903 the charms of the unspoiled little bay lying so close to Cape Town were spotted and on 26th September 1903 the Camps Bay Extension Estates was incorporated and the valley declared a township. Mrs Wege, wife of one of the directors, had just returned from a holiday in the United Kingdom and was struck by the similarity between Llandudno in Wales and Kleinkommetjie Bay. Llandudno in Wales has rocky promontories on either side of their bay, known as Orms. These are reminiscent of the promontories at Logies Bay on the northern end and Sunset Rocks to the south, and so it was decided to christen the new township Llandudno.

The Logies Bay promontory, her rocks weathered into caves sheltered from the ocean crashing below, has attracted people throughout the ages. These rocks are a distinctive characteristic of the Atlantic coastline, formed from a layer of Cape Granite forced up between the surrounding sedimentary Shale by volcanic action. Logies Bay also has a 44-metre wide dolerite dyke lying alongside the rocks on the granite outcrop, molten lava that was squeezed between fissures in the granite before cooling. This dyke is the widest in the peninsula and is a source of fascination for geologists and students the world over.

The Strandlopers were the first humans to inhabit the area. A shell midden has been found near the big cave overlooking Logies Bay, the remains of a kitchen rubbish heap of a clan of Khoikhoi who called the bay their home. Llandudno residents excavated the midden in 1953 and found artifacts confirming that people living off seafood and small game continuously inhabited the area for a long period. In the 20th Century, the same caves attracted hikers and campers for weekends away from the city. By the late 1920’s, regular visitors would leave camping gear behind in their favorite cave between visits – it was always there when they returned.

A group of regulars from Pierhead swimming club spotted a wood and iron shack on the beach which had been built as a hunting lodge by Major Davies who owned Ruyterplaats in Hout Bay. He sold it to the group for the princely sum of 60 pounds and “The Shack” was born. It was a popular rendezvous for hundreds of people for over 5 decades until it became the Surf Lifesaving clubhouse that still stands under the Milkwoods today.

A public auction of lots was held on 26th March 1904 and by 1905 the first house had been erected. The water supply was erratic and water shortages plagued residents for most of the century. In 1930 there were only two residents living permanently in Llandudno, but the number has slowly grown over the years as the township established itself. Electricity arrived in 1947 and the road was finally tarred in 1952. A farm school was established in 1954 with a handful of pupils, upgraded to a primary school in 1957. This was also the year that a group of residents got together to establish the church. The Sports Club and Surf Lifesaving Club came later.

The Llandudno of today still has no street lamps and no retail outlets. The beach remains unspoiled and the fynbos countryside stretches off untouched in each direction. To those living in Llandudno, it is a welcome sight to return home at the end of a day and see the twinkling lights nestled in the valley below Victoria Road, hear the sound of the ocean and the feel the mountains towering overhead. Life in Llandudno ranges from stormy winter days, taking a fresh wind-lashing of a walk to watch the power of the waves crashing on the Logies Bay rocks, to those hot, balmy summer days whiled away on the beach with friends, dogs and Frisbees. A sundowner on the beach with the sun setting over the ocean is an unforgettable experience too.

The history of Llandudno is courtesy of Sue Maude and Carey-Ann Sturgess who have co-authored a book on “The Life of Llandudno”. You can pledge to buy a copy of the book. To order your book please click here